Congressional elections .. Are the Democrats defying the historical trend of breaking the midterm elections 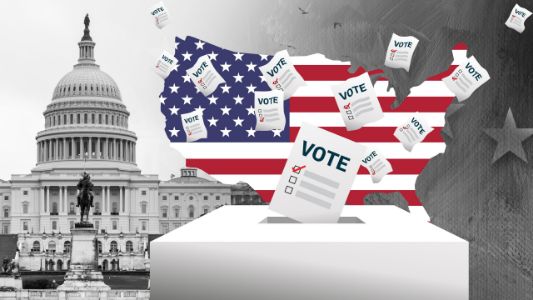 It seems that the Democrats will maintain their narrow majority in the Senate over the next two years, after the victories they achieved in the Nevada and Arizona elections,

bringing the number of Democrats in the house to 50 out of 100, while the Republicans gained 49 seats, while the seat of the state of Georgia remains pending the runoff on the sixth of December.

With these results, the Democrats defied the historical trend of breaking the mid-term elections of the parties in power, strengthened their majority as voters rejected Republican candidates who allied themselves with former President Donald Trump.

Retaining control of the Senate is a major boost for President Joe Biden over the remaining two years of his first term in the White House, with another Senate race pending that will determine the final balance of power in the chamber, and ultimately the extent of the president's party's influence.

"I think it's a reflection of the quality of our candidates," Biden told reporters in Cambodia shortly after CNN and other news outlets predicted that the Democrats would retain the Senate Majority. They are all working on the same program".

The Democrats ' control of the House will give fate to the passage of a limited number of controversial bills that are allowed to pass by a simple majority of votes and thus the ability to confirm Biden's judicial nominees, which means avoiding scenarios like the one faced by former President Barack Obama in 2016, when the then Senate Majority Leader Mitch McConnell refused to hold a vote on the Supreme Court nominee, Merrick Garland.

This also means that Senate Democrats can reject bills passed by the House of Representatives and can set their own agenda.

Ballots are still being counted in key counties in some states, including California, Arizona and Oregon, with large quotas of mail-in ballots.

And even if the Democrats do not retain control of the House of Representatives, they can leave the Republican Party with a small and undisciplined majority.

We have 191 guests and no members online