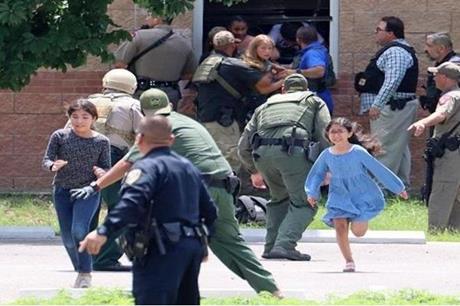 Last May, a teenager committed a massacre at an elementary school in Yovaldi, Texas, where 21 people, 19 students and two workers, were killed.

While a news report stated that the US police did not try to open the classroom, which was witnessing the horrific massacre

The San Antonio Express-News, a local newspaper in Texas, reported that CCTV footage showed that the police had made no efforts to open the separation door, with the thug committing the massacre.

The newspaper added, citing a security source, that there was no reason to believe that the door was tightly closed.

The CCTV footage of the massacre was not released, but the local newspaper saw the footage.

The school has an automated door closure system when it is closed, but at least one of them was broken on the day of the massacre, allowing the thug to enter the school.

It is believed that the door to the classroom where the victims were killed was also broken, and the killer could not close the door from inside.

This meant  that police officers could easily and quickly enter the scene, but that did not happen.

The policemen lost a long time looking for a "key key" that could open the classroom door, as they believed the door was tightly closed.

It turned out that they were experimenting with keys other than those in which the killing was being carried out.

In the end, the police shattered the classroom's windows and stormed him, killing serial killer Salvador Ramos (18 years old).

The Yuvaldi Police faces strong criticism for their slow response to the painful incident, which has allowed the thug to kill more children.

The official version of the mass shooting at the school raised many questions, especially as it saw contradictory information, such as officers' belief that the attack was over, but not so.

Texas Governor Greg Abbott said: "A lot of things have been said, some are true and some are not."