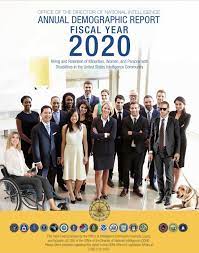 Following the circulation of the cover image of the Diversity Report's annual magazine, on which the Photoshop amendment was clearly featured, the US National Intelligence Organization (ODNI) has been subjected to a major outcry on social media.

The report entitled "Employment of Minorities, Women and Special Needs in the United States Intelligence Community" featured a picture of the Organization's diverse and smiling staff, along with a woman in a wheelchair and a blind man with a dog, according to the US "New York Post."

Followers commented that the picture was Photoshopped and that the diversity of the organization did not represent it, as it originally did not include those added.

The Republican political adviser, Luke Thompson, commented: "The woman in the chair and the blind man do not appear in the original image, it seems that the images were added on top of the image used, show me the worst use of stored images ever."

Ash Shaw, senior editor at the Daily Wire, agreed, tweeting: "That's too bad. Is the office not diverse enough to take its own picture?"

User irishspy said: "I find it a little annoying that within the vast intelligence network, they don't seem to have anyone good at faking pictures."

For his part, the Director of National Intelligence, Avril Hines, responded in a statement accompanying the report: "The intelligence community must reflect the diverse composition of America and demonstrate that we are promoting an environment in which every professional can succeed."

He continued: "Promoting diversity, equality and inclusiveness is fundamental to our democratic values and vital to fulfilling the mission of the Investment Commission. It takes work every day. We are committed to doing more to address this critical problem and accelerate our progress. "

We have 85 guests and no members online