On charges of inciting a rebellion, Trump faces impeachment again 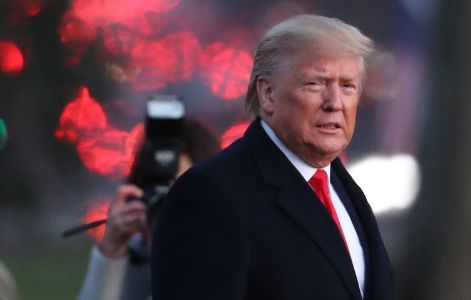 Three Democrats in the US Congress are seeking to present the articles of impeachment of President Donald Trump to the House of Representatives next Monday, according to US media.

NBC reported that Democratic lawmakers Ted Liu from California, Jimmy Ruskin from Maryland and David Sislini from Rhode Island began preparing the impeachment draft in Cecilini's office during riots in the US Congress on Wednesday.

On Thursday, Cecilini posted on Twitter the draft of the impeachment articles, which indicated that "the president deliberately made statements that encouraged illegal action in the Congress building ," and that "he will continue to be a threat if he is allowed to remain in office."

It also calls for "Trump to be held accountable based on one clause, which is inciting a rebellion," and that Trump has exposed US security and government institutions to a "great danger."

She added that Trump "threatened the integrity of the democratic system, interfered with a peaceful transfer of power, exposed a sector of government to danger, and betrayed the trust in his capacity as president."

And in the first reaction to the Democrats' move, White House spokesman Judd Deere said Friday evening that the politically motivated measures to try to remove the president during the remaining twelve days would only lead to further division.

Prominent Democratic lawmakers said Friday that the US House of Representatives may begin impeachment measures as soon as next week, if Vice President Mike Pence and members of the administration do not move to remove him.

Assistant Speaker Catherine Clark said, "We must remove Trump from office, and we will continue to work with every tool we have to make sure this happens to protect our democracy." , During the next week.

Senior Democratic Representative James Kleburn said he could confirm that "we've had discussions about this." He expressed his hope that House Speaker Nancy Pelosi would proceed with impeachment procedures, "if the vice president refuses to do what is required of him under the constitution. Everyone knows that this president is confused."

On Thursday, the Speaker of the US House of Representatives, Nancy Pelosi, called for the activation of the "25th amendment" of the constitution and the removal of US President Donald Trump. She said, "If Mike Pence (US Vice President) does not activate the 25th amendment to the Constitution ... Congress will seek to isolate Trump.”

The 25th amendment allows the vice president and a majority of government members to declare the president unfit to hold office. But this mod has never been used throughout American history.