After Pelosi, the house of the Republican leader in the US Senate is exposed to sabotage 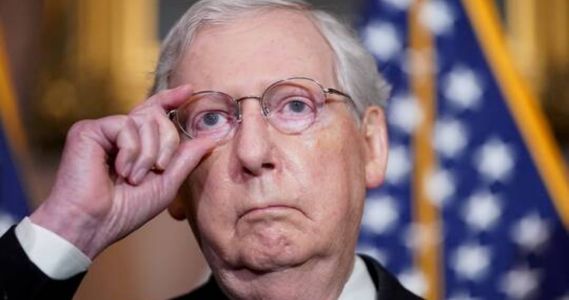 After the home of Democratic House Speaker Nancy Pelosi, Senate Republican Leader Mitch McConnell's house was also vandalized by unknown assailants during the early days of the new year.

And US media reported that phrases such as "Where is my money?" And "Mitch kills the poor" were written on the door of McConnell's house and one of his windows in Louisville, Kentucky.

Kentucky police said that the exposure to McConnell's home took place around 5 am local time on Saturday, and it was not clear if anyone was in the house at the time.

McConnell described graffiti as an "extreme fit of rage," adding, "Vandalism and the politics of intimidation have no place in our society."

The incident came after unidentified people placed a pig's head and fake blood outside Pelosi's home in San Francisco, and left graffiti on the parking lot door.

McConnell and Pelosi were targeted after a fierce debate about a plan to revive the US economy, which has been hit by the Covid-19 pandemic.

On Christmas Eve, a $ 900 billion plan was approved after the Democratic-led House of Representatives approved an increase in aid from $ 600 to $ 2,000.

But the Republican-led Senate did not approve the increase, despite angry calls from outgoing President Donald Trump to do so.

"The Senate will not be intimidated into putting more borrowed money into the hands of wealthy Democrat friends who don't need help," McConnell told reporters on Wednesday.