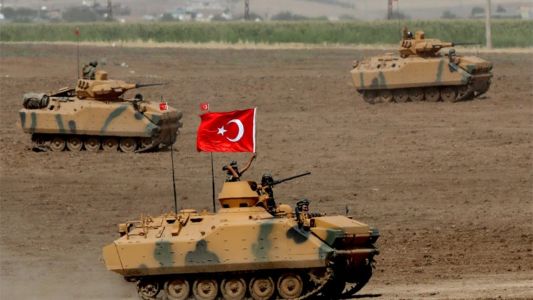 While she said that in response to the bombing of Istanbul, Turkey recently launched a barrage of air strikes on targets suspected of belonging to Kurdish militants in northern Syria and Iraq

Turkey also threatened to escalate air strikes to a ground incursion, and Turkish President Recep Tayyip Erdogan said: "We managed to overcome the terrorists in the past days with our planes, artillery and drones, at the earliest opportunity we will uproot them all with our tanks and soldiers.

In a speech to the deputies of his Justice and Development Party in parliament, Erdogan said that "Turkey is more determined than ever to secure its southern borders".

"Its operations will ensure the territorial integrity of Syria as well as Iraq, where it has also carried out operations against Kurdish militants,"he added.

Simultaneously with Erdogan's speech, a Turkish March targeted the headquarters of the Syrian Democratic Forces at a Russian base located in northeastern Syria, a Kurdish spokesman told Agence France-Presse.

SDF spokesman Farhad Shami said that the Turkish shelling hit a Russian base located north of Tal Tamr in Al-Hasakah province, killing a member of the SDF and wounding three others.

Turkey has also launched a barrage of air strikes on suspected targets of Kurdish militants in northern Syria and Iraq.

During this operation, " 471 targets were hit and 254 terrorists were neutralized," according to the Turkish Defense Ministry.