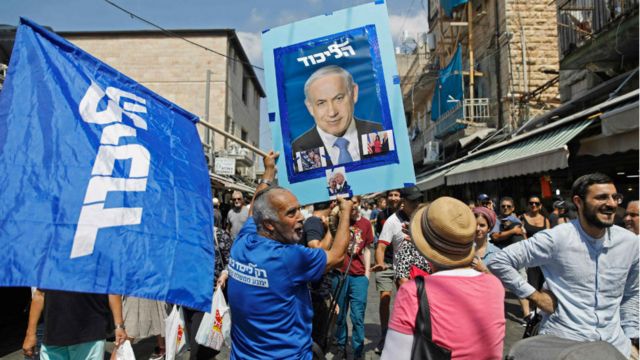 After accusing former Israeli Prime Minister Benjamin Netanyahu of bribery, breach of trust and forcing him to leave office in mid-2019

Since that time , the Hebrew state has been spinning in a vicious circle of political tension and instability

Netanyahu was forced out of office after Yair Lapid unexpectedly allied himself with liberals, rightists, and Arab parties and succeeded in forming a new government.

This coalition government lasted, more than many expected, but finally collapsed about 4 months ago.

Lapid is currently serving as prime minister until elections are held, while Netanyahu is seeking to hold the post for a sixth term, which will be a record as the longest-serving prime minister in the history of Israel

What gives Netanyahu a strong boost in these elections is the agreement made by Likud with the "religious Zionism" party, whose popularity is rising rapidly.

Israelis began heading to the polls this morning to vote in the legislative elections, which are being held for the fifth time in four years

This time, the elections look as if they were a referendum on Netanyahu, rather than elections related to the country's political and security issues, especially the Iranian nuclear file and the conflict with the Palestinians.

So far, with the fate of the vote pending, it seems that the turnout will be large, reaching 67.4 percent in last year's elections, while the percentage of voting among Arab voters, who make up about 20 percent of those registered in the electoral register, reaches about 44.6 percent.

The legislative elections in Israel coincide with the escalation of violence in East Jerusalem and the West Bank, which Israel occupied in 1967.

Since the beginning of this month, 29 Palestinians and three Israelis have been killed in the West Bank, according to an AFP toll.

The Israeli army announced the closure of crossings with the occupied West Bank on Tuesday, excluding humanitarian cases.

While many candidates saw security as a concern, none campaigned on a platform of reviving moribund peace talks with the Palestinians.

But after what we have seen over the past years, most Israeli analysts expect that the country will enter another tunnel in which we will witness the failure to form a new government, and we will have to return to the voting boxes again.