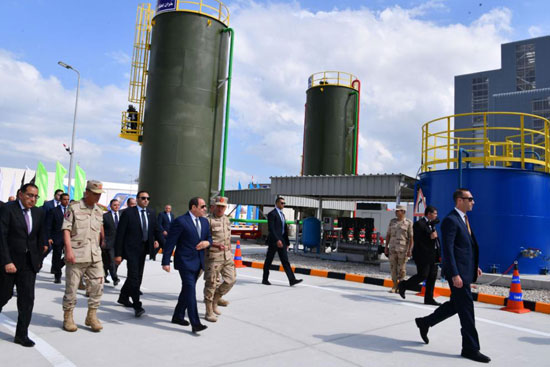 President Abdel Fattah al-Sisi today inaugurated the Black Sands Complex in Al-Burullus, Kafr el-Sheikh governorate, which is the newest plant of its kind in the world using advanced mining technology

The new plant in El burlos is a new addition to the series of national projects aimed at maximizing the utilization and optimal exploitation of Egypt's natural resources, as well as achieving the added value of minerals extracted from black sand

Egypt has a huge natural wealth, including black sand, which has been a dream for decades, and black sand is used in many fine industries

The most prominent minerals found in the black sand are ilmenite, zircon, magnetite, rutile, garnet in addition to monazite, which contains radioactive substances, and countries are working to extract those minerals from the black sand for economic exploitation and at the same time clean the beaches of radioactive substances harmful to the environment

It is estimated that the geological reserve of black sand in Egypt reaches about 1.3 billion meters, while the average concentration of heavy metals in it is about 65%, making it the largest reserve in the world

The black sand in Egypt contains about eight types of heavy metals, ranging from 1-8% in the composition of these sands, and reaches more than 80% in the Burullus area in Kafr el-Sheikh governorate, which is the highest concentration of these minerals in the black sand

We have 287 guests and no members online