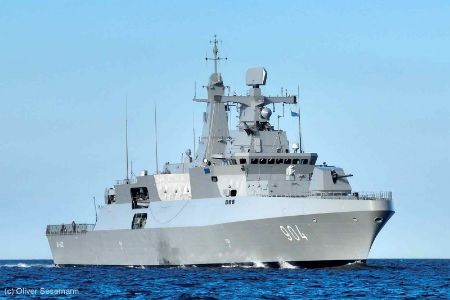 Marking its entry into service in the Egyptian Navy, which has recently witnessed a technological breakthrough in armament systems and combat efficiency, according to the latest international systems, the Egyptian Armed Forces received the first naval frigate " Aziz "of the Meko - A200 model, which was built at the German SBN Arsenal

During the ceremony held in the German city of Bremerhaven, the commander of the Egyptian Naval Forces, Lieutenant General Ashraf ATWA, hoisted the Egyptian flag on the frigate "Aziz", which is one of the 4 frigates of this class contracted between Cairo and Berlin.

"The Egyptian leadership is proud of the depth and strength of Egyptian-German relations and the convergence of views on many issues and topics,"Atwa said in a speech during the ceremony.

He also pointed out that"the Egyptian Armed Forces are keen on implementing a comprehensive strategy to develop and modernize the Egyptian navy to enhance security and stability in the areas of operation of the naval forces, and support its ability to face the current challenges and risks in the region".

The commander of the Egyptian Navy considered that "the new unit is the most advanced in the Egyptian navy, to enhance its ability to achieve maritime security and protect borders and economic interests in the red and Mediterranean Bahrain; to reach a deterrent force that provides freedom of safe maritime navigation in light of the challenges witnessed in the region."

The new multi-mission frigate has the ability to sail 6,800 nautical miles

It has many technical characteristics and modern armament systems, which enable it to carry out all combat missions at sea in peacetime and war.

It helps in securing the sources of various natural resources of the state by sea.

A huge technological addition to the potential of the naval forces and support their ability to protect Egyptian national security.

The ability to secure Allied shipping lines with the insurance of commercial vessels passing through them.

Implementation of humanitarian support operations in the affected areas.

It is noteworthy that the specialized and technical crews working on the new unit were prepared and qualified in "record time", according to a simultaneous program implemented in two stages in Egypt and Germany.

We have 259 guests and no members online