The collapse of silos on the anniversary of the explosion is a systematic plan aimed at killing hope and sowing despair? 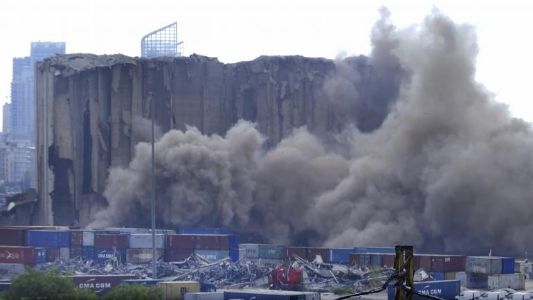 In a mind-boggling query during a march by the victims of the Beirut port explosion two years ago, four silos collapsed from the northern side of the building and dusted nearby

neighbourhoods, on the second anniversary of the Beirut port explosion in Lebanon, amid questions that coincided with the anniversary of August 4, the day of the port disaster two years ago.

The victims of the port explosion marched in front of the Palace of Justice in the Lebanese capital around 4 p.m. on Thursday towards the expatriate statue opposite the port of Beirut, carrying coffins and coffins at a symbolic funeral with martyrs' names and bloodstained fingerprints. "We will not calm down and we will not shut up until the moment the truth is revealed," he said.

The collapse of parts of the silos during the commemoration added to the suspicions of Lebanese on social media pages, as they asked, "Why did the silos collapse on August 4?"

The second anniversary of the August 4 explosion topped Lebanon's social media sites, and the attitudes of politicians, clerics, activists, intellectuals and the judiciary.

In front of the French Embassy building in Beirut, one of the victims' families stated: "It is regrettable that France has so far refused to apply to the Human Rights Council for an international commission of inquiry and President Emmanuel Macron has not kept his promise."

On Wednesday night, the blaze was renewed in wheat silos destroyed by the explosion.

On his Twitter account, the Lebanese Judges' Club tweeted: "Two full years, justice is shackled, the blood of martyrs is safe in your necks, as if nothing was. take your hands off the judiciary, so that the investigation can be completed for the sake of truth ".

We have 279 guests and no members online