For the second time in a week... I break into an open sit-in for supporters of the Sadri movement in the Iraqi Parliament 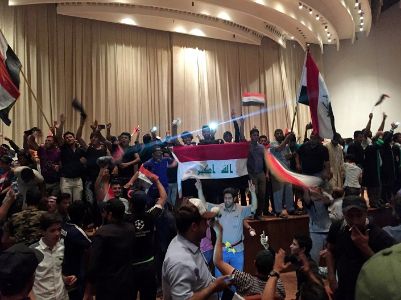 After thousands of demonstrators on Wednesday stormed the Iraqi parliament building for a short period of time, and for the second time in less than a week, hundreds of

supporters of the Shia cleric and leader of the Sadri movement, Muqtada al-Sadr, stormed the Iraqi parliament building in Baghdad, announcing an open sit-in denouncing the nomination of Minister and former Governor MohMohMohammad Shia al-Sudani.

It should be noted that Sadr, a key player in Iraq's political landscape, has always reminded his opponents that he still has a broad popular base and is influential in the country's politics, although his current is no longer represented in Parliament. Last June, the 73rd Sadri MPs resigned from Parliament, after holding the largest number of seats.

The demonstrators also reiterated their rejection of the name of Mohammad Shiya al-Sudan for Prime Minister, who was nominated for the post by Sadr's political opponents in the "coordination framework", which includes Shia blocs, most notably the rule of law led by former Prime Minister Nuri al-Maliki and the Fatah bloc representing pro-Iranian popular mobilization factions.

In anticipation of Saturday's demonstrations, the authorities tightened security and raised concrete barriers on the roads leading to the Green Zone, where Parliament is built. The demonstrators climbed the cement barriers preventing them from crossing, chanting "all the people and Yak Sid Moqtada".

We have 277 guests and no members online