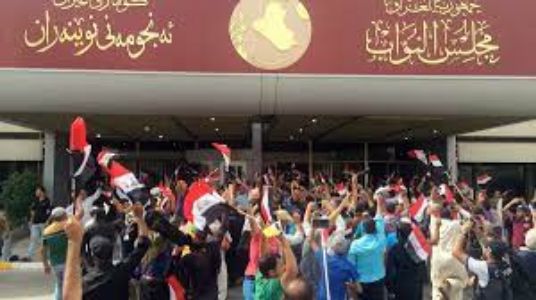 In a scene that repeats what happened in 2016, when hundreds of chest followers stormed the Green Zone, the House of Representatives, and prosecuted a large number of officials, for anti-corruption, before their leader ordered them out of the heavily fortified area.

Events are accelerating in Baghdad, after thousands of followers of the leader of the Sadr movement, Moqtada al-Sadr, stormed the heavily fortified Green Zone, in the centre of the capital, while the head of the State of Law coalition, Nouri al-Maliki, warned against confrontation, before Sadr ordered his supporters to withdraw.

Hundreds of Sadr supporters entered the headquarters of the Iraqi House of Representatives and the chambers of special committees, chanting pro-chest slogans, and against the forces of the Iran-backed "coordinating framework".

Prime Minister Mustafa al-Kadhimi, the commander-in-chief of the armed forces, called on the demonstrators to commit to peaceful demonstrations and immediately withdraw from the Green Zone.

In a statement, Al-Kadhimi said: "We call on our demonstrators to abide by their peace, preserve public and private property, instruct the security forces responsible for protecting them according to regulations and laws, and immediately withdraw from the Green Zone."

"The security forces will be committed to protecting state institutions, international missions and preventing any breaches of security and order."

Sadr called on his supporters to withdraw, and said it was a message for the corrupt.

Al-Sadr said in a statement: "A revolution of reform and refusal to sacrifice and corruption has reached your message, loved ones, has terrified the corrupt.. ear jar, pray two knees and promise your homes safe ".

As the crowds of demonstrators in the Iraqi Parliament wandered through its corridors, the forces of the "coordinating framework" issued a statement accusing the Sadr Stream of provoking chaos.

The statement stated that "after the forces of the coordination framework completed practical steps to begin the formation of a national service government and unanimously agreed to nominate a highly qualified and impartial national personality who has been monitored since yesterday (Tuesday) suspicious movements and calls urging chaos, discord and civil peace strikes ", noting that" today's rapid incidents, allowing demonstrators to enter the special government area, storming the House of Representatives and constitutional institutions and failing to perform their duties are highly suspicious. "

"We hold the caretaker government fully responsible for the security and safety of government departments, associates, diplomatic missions and public and private property and call upon it to take firm action to maintain security and order and prevent disorder and illegal practices. We also call on our dear Iraqi people to become more aware and wary of the machinations of enemies and to address any sedition that the people and their children fuel."

Despite comments from some of the leaders of the Sadri movement on their vision of the future Government, the basic demands of the head of the movement, Muqtada al-Sadr, are not yet known and whether he wants to choose a non-Mohammed Shiya al-Sudan personality, or withdraw the "coordination framework" from the consultations on the formation of the Government, especially since he has not clearly stated his basic requirement.

Although he withdrew from consultations on the formation of the Government, the leader of the Sadri movement, Muqtada al-Sadr, remained present in Iraq's political landscape through his repeated statements and comments on the steps of the forces of the "coordination framework".

After "failing" to form the national majority government he was seeking with his allies of the Year and the Kurds, Sadr announced, last month, his total withdrawal from the political process, in a resolution that caused widespread uproar.

We have 218 guests and no members online