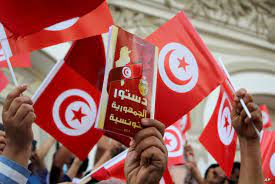 After the end of the referendum marathon inside and outside, Tunisian polls revealed that more than 90 percent voted "yes" in favor of the new constitution, what analysts considered "a message to organize the terrorist brotherhood as undesirable and would have no role in new Tunisia."

On Monday, Tunisians voted on the draft constitution tabled by the country's president, Kais Saied, for a plebiscite. The counts began and the results will be announced on Tuesday, and appeals will be opened and considered.

Tunisian state television confirmed that polls showed "overwhelming" approval of Tunisia's new constitution by voters, up to 92 percent, while the Independent Electoral Commission revealed that turnout exceeded 27 percent with about 2 million voters.

Following the official closure date, Tunisians flocked to Habib Bourguiba Street in the capital to celebrate the vote in favour of the Constitution, holding the country's flags and chanting slogans in favour of President Kais Said.

The new draft constitution is one of the extraordinary actions of the Tunisian president on July 25, following the removal of the Brotherhood from power, the removal of the government, the appointment of another, the dissolution of the Council of the Judiciary and Parliament, the promulgation of legislation by presidential decrees and the early election to December 17.

The new draft Constitution contains 142 articles and grants broad powers to the Head of State contrary to the 2014 Constitution, which provided for a quasi-parliamentary system, causing a conflict and conflict between the three branches of power (the Presidency, Parliament and Government), reflecting the country's deteriorating situation, according to analysts.

In a speech after his vote, Tunisian President Kais Saied sharply criticized the Brotherhood and the Ennahda movement, saying: "They are not from this people, the homeland betrayed him, sold him and mortgaged the country to external parties, demanding that the people not express their will".

He added: "We have a historic choice and the Tunisian people have to be on date with history and not leave those who burn forests and distribute money so that they don't go to the ballot boxes", noting that on Sunday the security authorities suspended someone who distributes money to influence the will of voters.

We have 52 guests and no members online