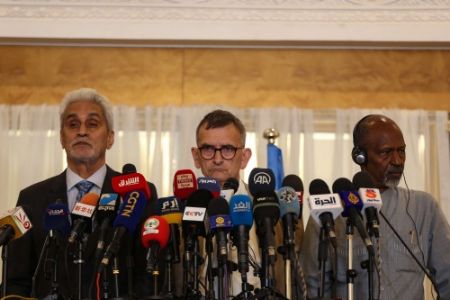 Announcing that it would engage in a civilian dialogue after the withdrawal of the Sudanese army from the negotiations, the Sudan's tripartite dialogue mechanism comprising

the United Nations, the African Union and IGAD informed the participating forces of the suspension of the dialogue, stressing that they would continue to "work with all stakeholders to find a political solution to the crisis".

The tripartite mechanism in the Sudan also stressed that "there would be no point in continuing the dialogue after the withdrawal of the military component".

Sessions of direct dialogue between the Sudanese parties under the auspices of the tripartite mechanism for resolving the country's political crisis began last month in Khartoum, while the main opposition forces in the Sudan, the Communist Party, the Forces for Freedom and Change (Forces nationales) and the Umma Party, boycotted the work of the inaugural dialogue session.

The tripartite mechanism initiative is centred on creating conditions for dialogue to end the country's political crisis through constitutional arrangements, setting criteria for the selection of the Head of Government and ministers and developing a road map for the organization of free and fair elections.

Many Sudanese cities, in particular the capital Khartoum, are witnessing demonstrations calling for the surrender of power to civilians.

Al-Burhan decided to withdraw the military component from dialogue with political forces; He pointed out that the Transitional Sovereignty Council will be dissolved, once the forces agree to form a civilian government.

A Supreme Council of Armed and Rapid Support Forces, whose functions were to manage the country's military issues, would be established; This followed the arrival of a civilian Government and the dissolution of the Sovereign Council.