Qatar's Foreign Minister confirms his country's support for regional dialogue between Iran, the Gulf States and the region 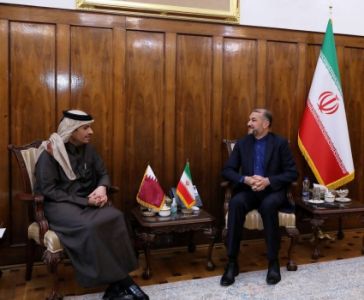 During a press conference with his Iranian counterpart in Tehran, Sheikh Mohammed bin Abdul Rahman stressed that "Doha supports any negotiations to reach an agreement that takes into account the concerns of all parties", welcoming Iran's regional consultations, according to the Iranian Students Agency-ISNA.

The Qatari Minister for Foreign Affairs also stressed the need for constructive efforts to make the Iran nuclear agreement a success and promote regional dialogue. "

The Qatari Minister reiterated his country's support for the regional dialogue on an ongoing basis, as talks between Iran, the Gulf States and the region in this context could yield positive results for the people of the region. "

He added: "We want our relations with neighbouring countries to be constantly growing. These prosperous relations among the countries of the region can serve our people ", stressing that he had talks with his Iranian counterpart in this regard and that the latter viewed such regional talks positively.

On Thursday, Abdullahian said that "his country's assessment of the nuclear negotiations with America in Doha is positive."

Iranian media reported that "Qatari Foreign Minister Sheikh Mohammed bin Abdulrahman Al Thani made telephone contact with his Iranian counterpart Hussein Amir Abdullahian, and the two sides discussed the latest developments in the recent negotiations in Doha to repeal the embargo on the country."

The Iranian Foreign Minister said that his country "has the full will to pursue negotiations with a view to reaching a realistic agreement", stressing Iran's seriousness in reaching a tight and robust agreement.