Haftar visits Derna for the first time in 4 years 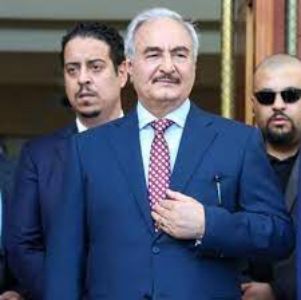 At the invitation of the people of the city of Derna to celebrate the holidays of Karama, the Commander-in-Chief of the Libyan Army, Marshal Khalifa Haftar, visited the city of Derna, which was the rule of extremist terrorist organizations, most notably ISIS.

General Khaled al-Mahjoub, director of the Libyan Army's Moral Directorate, said the visit coincided with the fourth anniversary of the liberation of the city of Derna from terrorist organizations that controlled the city.

Al-Mahjoub added that large crowds of people came out to receive Marshal Haftar and expressed their joy at getting rid of the terrorist organizations that controlled the city.

He pointed out that this meeting and the great ovation that Marshal Khalifa Haftar was met with by the inhabitants was a clear message of the great standing of the army as the Libyan people rose up over corruption and "political bodies clinging to power."

General Khaled al-Mahjoub, director of the Libyan Army Moral Directorate, pointed out that Khalifa Haftar's visit marked the first visit of the army commander to the city of Derna, after its liberation four years ago.