Najla Al-Mangush : demands the departure of all parties in Libya 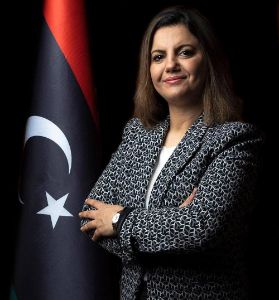 Against the backdrop of angry demonstrators storming the headquarters of the Libyan House of Representatives in Tobruk last Friday evening, tampering with its contents and setting fire inside it, protesting against poor living conditions.

On her Twitter account, Al-Mangash announced her "full support and support for all the demands of the protesters demonstrating against her government, and against all those in power", calling these protests "a new spirit in Libya's veins."

On the other hand, dozens of people marched in the capital Tripoli on Friday, demanding that all political objects in Libya be dropped during a demonstration launched in conjunction with the rest of Libya's cities.

The demonstrators described "the country's current political bodies as a cause of corruption in the country and the obstruction of the presidential and parliamentary elections scheduled for 24 December last."

Libya is experiencing an escalating political crisis in a dispute between two Governments, one chaired by former Interior Minister Fathi Bashagha, whose confidence was granted by the Parliament in Tobruk, far east of the country, last March, and the second by the Government of National Unity, which stemmed from political agreements sponsored by the United Nations, more than a year ago, and chaired by Abdul HamHamid al-Dubiba, who refuses, refuses, refuses, refuses to hand in elections.

We have 258 guests and no members online