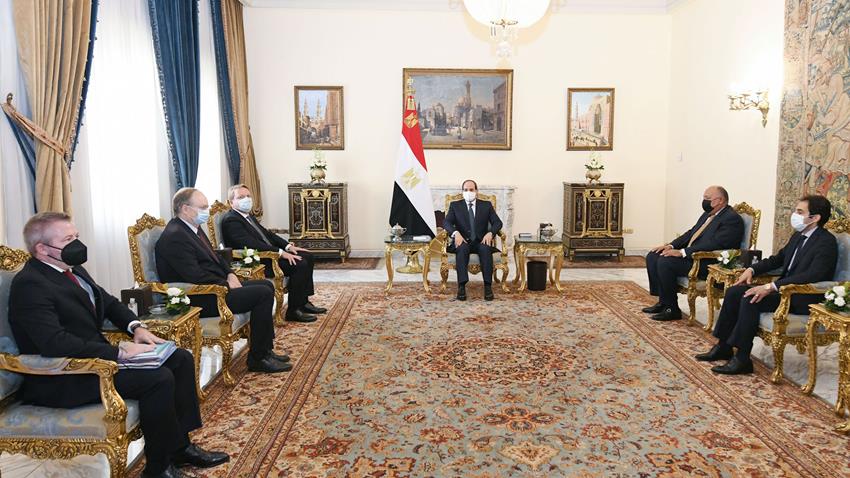 During his welcome on Wednesday, European Union Commissioner for Neighbourhood and Expansion Policy Oliver Farhele, Egyptian President Abdel Fattah el-Sisi stressed the importance of ending the presence of armed militias and extremist groups within Libya, considering that its presence undermines opportunities for stability and peace.

According to a statement by the spokesman for the Egyptian Presidency, the meeting addressed the developments of a number of international and regional issues, notably the Libyan issue, illegal migration and the Russian-Ukrainian crisis as well as the Ethiopian Renaissance Dam crisis.

The Egyptian presidential spokesman said that with regard to Libya, the importance of accelerating the course of holding elections was agreed upon.

The spokesman added that the European Commissioner praised Egypt's efforts in combating illegal migration, and "He underscored the EU's appreciation for these efforts and the cessation of illegal immigration cases from Egypt since 2016, especially since Egypt hosts more than 6 million refugees of different nationalities who enjoy all fundamental rights, which is a successful example in the region in this regard under the wise leadership of President Abdelfattah al-Sisi."

During the meeting, the President assured the European Commissioner of the importance of that existential issue to Egypt and its people, and Sisi stressed "Egypt's firm position in reaching a binding legal agreement on the rules for filling and operating the dam in accordance with the relevant international law in this regard."

According to the spokesperson, the meeting addressed developments in the Russian-Ukrainian crisis and its economic repercussions at the global level, particularly in the areas of energy and food.

Views were also exchanged on the Palestinian issue and on ways of joint coordination between Egypt and the European Union towards efforts to improve living and service conditions in the Gaza Strip, in complementarity with the Egyptian Initiative for the Reconstruction of Gaza

We have 229 guests and no members online