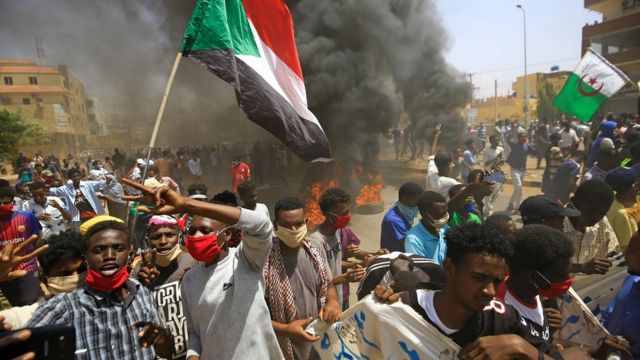 For more than two months, Sudanese have been holding continuous marches protesting against the decisions taken by Army Commander Abdel Fattah Al-Burhan on October 25, declaring a state of emergency and dissolving the Sovereign Councils and Ministers.

Proof pledged to protect the transition period and organize elections in the mid- 2023, but protesters are demanding that the army be removed from political life.

Several actors in the political landscape are seeking to draft a pact to resolve the crisis, but the positions of the political parties remain far apart with high street demands.

Thousands of Sudanese in the capital, Khartoum, and a number of other cities in the country have marched in protest for civilian rule amid tight security.

Since the early morning, most of the major bridges between the three capital cities of Khartoum, Omdurman and Khartoum have been closed by sea, barbed wire and cement barriers have been placed on the main roads leading to the Army General Command and the Presidential Palace in central Khartoum.

The country's situation is further complicated by 56 people killed in the protests and the resignation of Prime Minister Abdullah Hamduk from office last Sunday.

International efforts to surround the crisis are intensifying as an American delegation holds consultations with a number of Sudanese forces.

The visit of the American delegation comes less than two days after the countries of the troika (Norway, the United Kingdom and the United States) and the countries of the European Union announced in a statement, Tuesday, that they would not support any Prime Minister appointed in the Sudan without the consent of civilians and called for the return of the constitutional document signed in 2019.

We have 549 guests and no members online