The Sudan continues to operate despite tighter security measures, the return of the Internet and communications 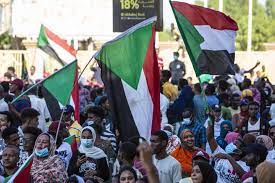 While Internet services and telephone communications returned in the Sudan, the Central Committee of Doctors of the Sudan announced that dozens had been injured as a result of confrontations between protesters and security forces in demonstrations.

In a statement, the Central Committee of Doctors of the Sudan said, "To date, the Commission has monitored 178 injuries, including 8 with live bullets, 3 of which are unstable."

Sudanese security forces fired tear gas to disperse the protesters in Khartoum, while demonstrators took to the streets in the Sudanese capital and elsewhere to denounce the actions of Army Commander Abdel Fattah Al - Burhan last October.

Even as security measures have been tightened, thousands have gathered since earlier on Saturday, around Khartoum, deploying troops and closing all bridges on the Nile River, which connects the capital to its twin city of Omdurman and a maritime area.

Referring to government buildings and key institutions, the authorities had warned the demonstrators not to approach the "sovereign and strategic" sites located in the centre of Khartoum,

The city's security committee also said that Sudanese forces would "deal with chaos and violations."

Rallies began in various locations, and protesters were supposed to rally at the presidential palace. However, the security forces fired live ammunition and used tear gas and water hoses to disperse those who tried to approach the palace.

We have 552 guests and no members online