The Arab Alliance... A qualitative operation against the Houthis in Sana'a, Sa'dah and Marbi 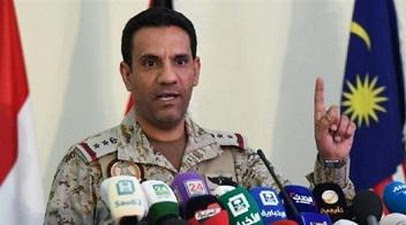 Against the backdrop of the recent escalation of fighting on various fronts of the Yemeni conflict, including the central strategic province of Marb and the western coastal province of Hodeida.

The Saudi - led Arab coalition today announced a "qualitative operation" against the Houthis in the provinces of Sana'a, Saada and Maarup in Yemen.

According to the official Saudi news agency WAS, the operation resulted in the destruction of 13 Houthi military targets in the three governorates, including weapons stores, air defence systems and marching communications.

The Coalition stressed that the operation "created the operational environment for an immediate response to threat sources."

Earlier in the day, the coalition had announced that more than 70 elements had been killed.Within the framework of 15 operations carried out in the past 24 hours against the Houthis in the provinces of Marb and El Obeid, Ansar Allah destroyed 11 military mechanisms and an air defence system, as well as 19 other operations on the west coast of Yemen targeting a command and control post, a storage and guidance site for marching aircraft and supply points for the Houthis.

The coalition has not yet commented on the Houthis' announcement today that they had launched a large-scale military operation in Saudi Arabia, with the aim being King Abdullah International Airport in Jeddah and a tributary of Aramco in this province.

Yesterday, the coalition announced the shooting down of four Houthi marches, as well as two ballistic missiles in Yemeni territory following their launch by the Houthis.

We have 401 guests and no members online