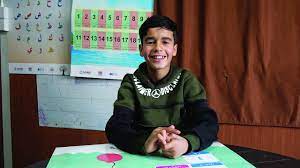 During the new Corona virus pandemic in the Zaatari camp in Jordan, a Syrian child was turned into a small educational institution that serves as a school for children's education.

Children who wish to study mathematics and Arabic are gathered at the House of Osama Muhammad (13 years old), where one or two days are devoted to teaching children some of the basics of these subjects.

And a family that helped him by providing simple equipment and possible educational means to carry out this interim task, as Osama became a small class despite the poor potential.

The Syrian child's family oversees this initiative, which was created by Osama, and is widely welcomed by the people.

The child noted that the students were happy with him, "because I'm a little older than them and I'm patient with them and teach them my own way without putting pressure on them. I teach them letters in Arabic, the beginning of spelling, the way in which letters are drawn, and in math the numbers, the collection and the presentation.

In turn, the child's mother stated that "parents trust him and prefer that their children go to these classes better than go to the option of playing in vain," as the Zaatari camp for Syrian refugees does not have many recreational options for children.

Osama expressed his hope to return to Syria and develop his educational skills: I hope that "I can help children in the process of learning and studying, thanks to my family and also teachers in school, I have been able to overcome the difficulties and have been able to make a special distinction in math, which is a difficult subject."

The Syrian child went on to explain: "I offer lessons to students younger than I am, and I am happy and proud to be doing a good job and helping them continue to pursue lessons naturally."

We have 400 guests and no members online