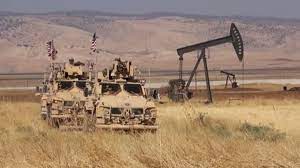 At a time when a high - ranking delegation of American and allied forces held a meeting with its loyal clans in eastern Syria, the perimeter of the U.S. Army's Al Omar oilfield was hit by a new missile attack in rural Deir ez - Zor in eastern Syria, the seventh of its kind in less than two weeks.

According to local sources in eastern Syria, "smoke plumes escalated from the perimeter of the base of the Al Omar oilfield east of Deir ez-Zor, which is the country's largest oil field and the largest U.S. base, following a new missile attack this afternoon, Tuesday, 13 June, the seventh attack in a week."

The sources continued that "the attack came hours after military reinforcements of more than 20 United States military vehicles arrived at the Al-Umar Oil Field and Kuniko Gas Plant bases, which include the armies of a number of States of the so-called" international coalition "coming from the Ramilan Oil Base north-east of Al-Hasakah.".

In the same vein, clan and local sources have confirmed that "a high-level delegation from the Coalition International and the United States Army held meetings with clans and social actors based on the organization of" Qasad "and leaders of the organization in the Syrian city of Al-Hasakah."

Sources revealed that the visits were aimed at discussing military issues and popular protests and expanding the state of popular rejection of the American presence in the region, as well as informing them that the mission of the Coalition International is to fight ISIS, which has ended its presence in the region, and that the Coalition International forces and the US army will not remain in the area for much longer.

We have 143 guests and no members online