From an elosion in a container... UAE Minister of Energy: All logistics operations have resumed at Jebel Port on 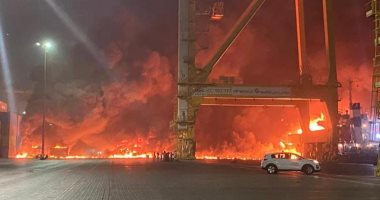 Sahil Al - Mazroui, the UAE Minister of Energy and Infrastructure, said that all logistical operations had been resumed in the port of Jebel Ali.

Stressing that "our priority now is to ensure that the accident does not affect the marine environment," the Minister confirmed the resumption of logistical operations in the port of Jebel Ali.

The Dubai Government Information Office confirmed that a fire broke out in the port of Jebel Ali, Dubai, yesterday during the night, as a result of an explosion in a container.

Mona Al - , Director General of the Dubai Information Office, said the fire at the largest shipping centre in the Middle East had resulted from a container containing flammable materials, which she described as a "normal accident."

Police in Dubai said the explosion may have been caused by "friction or high temperatures" during the hot summer weather.

According to the Bureau of Ship Management, the ship was preparing to dock on the dock "away from the main shipping line of the port."