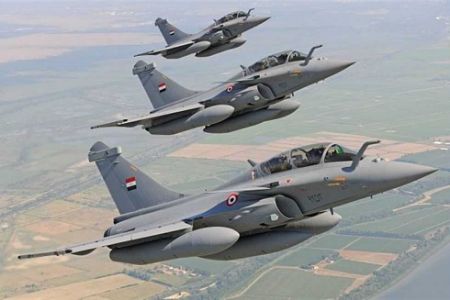 On Monday evening, the Egyptian Ministry of Defence announced an agreement with France to supply the army of Egypt with 30 new Rafale fighters.

The military spokesman for the Egyptian armed forces, Tamer al-Rafaei, stated in a statement: "In the context of the political leadership's interest in the development and development of all-State forces, Egypt and France have signed a contract for the supply of 30 Rafale aircraft through the Egyptian Armed Forces and the French company Dassault Aviación.

The UFO continued: "During 2015, Egypt and France entered into a contract to supply 24 Rafale aircraft to the Egyptian Air Force, which is the longitudinal arm of Egypt's national interests."

The statement read: "It should be noted that the Rafale aircraft have high combat capabilities, including the ability to carry out long-range tasks, as well as having a sophisticated armament system, high maneuverability and multiple armament systems, as well as an advanced electronic warfare system that enables them to carry out all the tasks assigned to them efficiently and ably."

Earlier, Dislose had revealed that France had agreed to sell 30 Rafale fighters to the Egyptian government under a $4.52 billion deal.

According to the report, the agreement between France and Egypt includes contracts from the rocket manufacturer M. B. Dee. "Eh." and Safran Electronics and Defence to supply equipment worth another €200 million.

The website said that the French State and its banks were "B." Anne. B. Paribas, Crédy ole, Sautie General and C.D. A. C. " It will guarantee up to 85% of the financing of the deal.

We have 212 guests and no members online