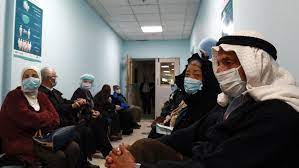 "Three Indian mutant (corona virus) infections were recorded in Jordan for people who did not travel," the Minister said.

"People with Indian ancestry are in good health," he explained.

Al-Howari added that "two cases were recorded in Amman and one in Zarqa (the city 23 km north-east of the capital) of people who did not travel, confirming that the appearance of mutated cases did not necessarily come from outside but rather as a result of qualitative reproduction."

The Indian mutant of the corona virus that has been monitored to date in at least 17 countries, including France, the United Kingdom and Germany, is believed to be the most contagious and may reduce the effectiveness of vaccines, but things remain vague.

It should be noted that other States have imposed restrictions on travellers from India. In France, they are subject to a mandatory 10-day stone after arrival, while Belgium has decided to ban their entry.

We have 192 guests and no members online