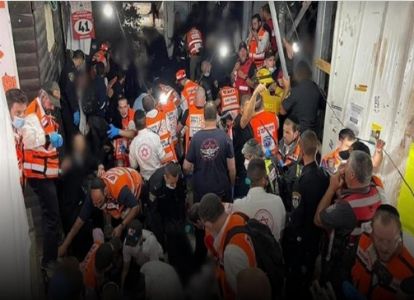 Israeli health authorities have reported dozens of deaths and injuries among settlers following a scramble during a religious ceremony in Jabal al-Jeramq (Merun), northern Israel

Media reports initially stated that the platform collapsed during the "Lac Bouamer" religious ceremony at Mount Meron in Galilee, but officials later said that the dead appeared to have died of asphyxiation or crushing under foot during a stampede.

A spokesman for the rescue service said that 38 people had been killed after a bridge collapsed during the revival of a Jewish religious event in the Galilee area.

Subsequently, Channel 13 reported that the casualty toll had risen to 44.

For his part, Israeli Prime Minister Benjamin Netanyahu said the crash of the bridge was a "terrible disaster."

Following the incident, Israeli police began evacuating and dispersing visitors from the mountain, and buses were stopped and visitors arrived at the mountain.

According to Israeli media, 38 people were killed after a bridge collapsed during the revival of a Jewish religious event in the Galilee area.

Prime Minister Benjamin Netanyahu, for his part, said the crash of the bridge was a "terrible disaster."

Hebrew media reported that aircraft had been summoned quickly to contribute to the transportation of dozens of casualties in the crash, and the Red Star of David spokesman reported that medical staff were providing medical treatment to dozens of injured people.

We have 199 guests and no members online