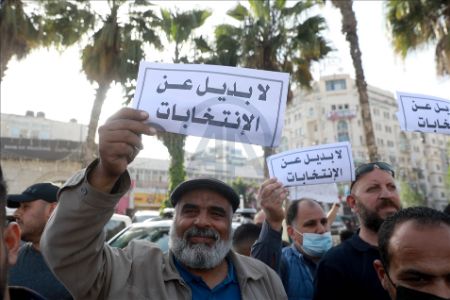 The Palestinian Authority has declared rumours that the Israeli government has agreed to allow elections, including in East Jerusalem, to take place "unfounded."

Earlier, Israel had tried to embarrass Palestinian President Mahmoud Abbas by suggesting that it did not interfere in the elections and that their holding depended on Abbas himself.

"The Israeli Government has officially informed us that the Israeli position on the holding of elections in East Jerusalem remains negative," said Fatah Central Committee member Hussein Sheikh.

The Sheikh stressed that the party to receive the official Israeli decision was the Palestinian National Authority.

According to Yisrael Hume and Walla: "Tel Aviv will not interfere in the elections, and European States have been informed that they have not prevented the holding of Palestinian elections in Jerusalem.

For his part, the head of the Political Service of the Israeli Ministry of Foreign Affairs, Alan Barr, stated in a meeting with 13 European ambassadors: "Tel Aviv considers Palestinian elections to be an internal affair and will not interfere with the ballot."

The statements reinforced the belief of Palestinian opposition and electoral blocs in Abbas' desire to cancel the elections due to disagreements within Fatah and the formation of alternative lists of movement leaders.

Member of the Hamas political bureau Musa Abu Marzouk stressed the movement's refusal to postpone the elections under any pretext, warning that any such step would affect the future of Palestinian reconciliation.

The official confirmed Hamas's position on the conduct of the ballot in Jerusalem: "The justification for the postponement is" unrealistic. "

For her part, Fatah explained: "It is a matter of sovereign and legal issues, given that East Jerusalem is the capital of the Palestinian State."

They noted that elections were a long-awaited fundamental right that must be implemented for political and national reasons and a commitment to the popular demand of more than 90 per cent of the electorate.

The letter stressed the importance of renewing the legitimacy of all Palestinian institutions to enable them to face the challenges that threaten the Palestinian cause.

Abbas is expected to hold a meeting with the factions to discuss the legislative elections, and he is expected to deliver a speech Thursday announcing that the elections will be postponed because they were not held in Jerusalem.

We have 194 guests and no members online