SHOKRY : Egypt is keen on Lebanon's security and stability. We call for the formation of a rescue government far from being confined. 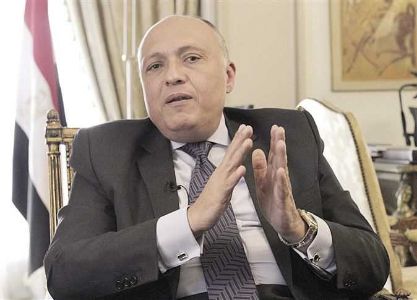 Today, Wednesday, Egypt called for the formation of a new government to end the political stalemate in Lebanon away from the logic of the blockade.

The Egyptian call comes at a time when efforts to form a government are faltering because of differences between the President of the Republic and the head of government in charge.

At a press conference in Beirut, Egyptian Foreign Minister Sameh Shoukry said that "Egypt is keen on Lebanon's security and stability, and that requires an end to the current stalemate

The Minister for Foreign Affairs of Egypt stressed the need to "form a rescue government outside of custody."

The past period saw a major clash between Aoun and the head of Government in charge, Saad Hariri, after President Hariri of Lebanon called a meeting to offer a Government formation or should leave his post to those who could form a Lebanese Government, as he described it.

Hariri was officially tasked with forming the Lebanese government last October, but he was unable to complete this task owing to political differences, particularly between him and the President of the Republic, at a time when the country is experiencing a severe economic crisis.

The formation of the Government is a prerequisite for the international community to assist Lebanon in implementing a rescue plan in cooperation with IMF, including the adoption of an economic, financial and administrative reform plan.

We have 127 guests and no members online