The Jordanian Royal Office announces the latest developments in the crisis of Prince Hamza, accused of conspiracy. 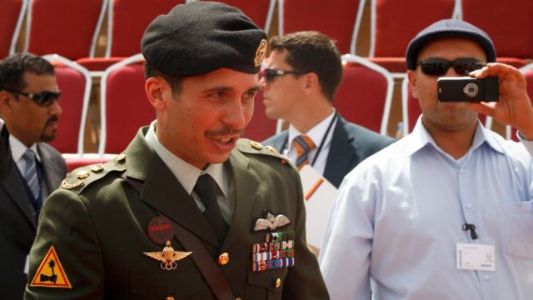 On Monday evening, the Hashemite Royal Diwan announced new developments in the crisis of former Crown Prince Hamza bin Al Hussein, who was prevented from leaving his home on military orders after he was accused of conspiring with outsiders.

On Sunday, Jordanian authorities revealed a "conspiracy," which they said had targeted the "security and stability" of their country. Prince Hamza accused King Abdullah II's half-brother and other close associates.

Jordanian Deputy Prime Minister Ayman Safadi said at a press conference: "The security agencies have, over a long period of time, followed through thorough and vigorous investigations by the armed forces and the Public Intelligence and Security Service, the activities and movements of His Serene Highness Prince Hamza bin Hussein and Al-Sharif Hassan bin Zeid, on behalf of Awadalla and other individuals, aimed at the security and stability of the country.

Asked how many people had been arrested Saturday: "I believe between 14 and 16 people in addition to Awadalla (former Chief of the Royal Cabinet) and Sheriff Hassan Ben Zeid."

"In the light of these investigations, the security agencies have recommended to King Abdullah that these activities and their agents be referred to the State Security Court for legal action after preliminary investigations have shown that these activities and movements have reached a stage that directly affects the security and stability of the country."

He explained: "The King, however, considered that Prince Hamza should be spoken directly to deal with the matter within the Hashemite family to dissuade him from such activities, which were aimed at and used to tamper with the security of Jordan and Jordanians and constituted a departure from the tradition and values of the Hashemite family."

He stressed that "yesterday the Joint Chief of Staff met with Prince Hamza to deliver this message and asked him to cease all moves and activities aimed at the security and stability of Jordan.

Prince Hamza noted in a video video, received by the BBC through his lawyer, that a number of his friends and acquaintances had been arrested, his guard had been withdrawn and his Internet and communication lines had been cut off.

The Emir asserted that he was not part of "any conspiracy or organization that receives external funding," but criticized the "collapse of the governance system, corruption and incompetence in the administration of the country" and prevented criticism of the authorities.

In a tweet, his mother, Queen Noor, condemned what she described as "slander," and asserted that she "prays for truth and justice for all innocent victims."

On Saturday evening, the Chief of the Joint Chiefs of Staff of the Jordanian Army, Major General Youssef Al - Haniti, confirmed in a statement: The allegations about the arrest of the former Crown Prince were "incorrect," but he explained that he was "told to stop making moves and activities to target the security and stability of Jordan."

He noted that this was "part of a comprehensive joint investigation by the security services," which resulted in several arrests.

He asserted that "all actions taken within the framework of the law and following vigorous investigations have called for them," noting that "no one is above the law," and stressing that "Jordan's security and stability take any account."

According to an unnamed U.S. intelligence official, the Jordanian authorities had placed Prince Hamza bin Hussein under house arrest, and had arrested some 20 Jordanian officials as part of an investigation into the planned overthrow of the King.

According to a senior intelligence official, "the move followed the revelation of what the Royal Office described as a complex and far-reaching conspiracy."

According to the statements, the plot includes "at least one member of the royal family, clan leaders and members of security institutions."

Prince Hamza is the eldest son of the late King Hussein by his American wife, Queen Noor, and is officially related to his brother King Abdullah, who is close to the people and elders of the clans.

King Abdullah named Prince Hamza as crown prince in 1999 at his late father's will, but stepped down from office in 2004 to name his son Prince Hussein as crown prince.

We have 120 guests and no members online