After floating the delinquent ship... The US Fleet Strike Force crosses the Suez Canal 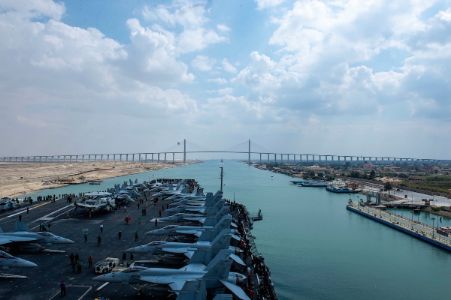 Video and footage showed the moment the USS Dwight D. Eisenhower, the lead in Eisenhower's aircraft carrier strike group, the Suez Canal, heading south to the Red Sea, for the first time after the delinquent ship successfully floated the Channel.

The Eisenhower Carrier Strike Force is the first U.S. warship to cross the Suez Canal, since it reopened on March 29.

Naval Lieutenant General Samuel Paparro, commander of the United States Navy Central Command and commander of the Fifth Fleet and the Joint Naval Forces, said: "We appreciate the efforts of the Government of Egypt and the Suez Canal Authority to ensure the safety of navigation in this vital passage of all ships and to allow the Eisenhower Carrier Strike Force Group to cross so quickly."

While in the US 5th Fleet area of operations, the Carrier Strike Force Group (Eisenhower) will operate and train alongside a number of allies and partners, providing naval aviation support for Operation Solid Resolve.

Marine Major General Scott F. Robertson, Group Commander, Second Strike Force: "Our strike group is enthusiastic about sailing and flying within our Red Sea operations." "This is yet another demonstration of the importance of our regional partnerships throughout the American Fifth Fleet Area of Responsibility, and the improvement of our relationship with Egypt is a continuing strengthening of the trust and unity of our enduring maritime efforts."

Arab and international States commended Egypt's efforts to deal with the accidental accident at the Suez Canal caused by the delinquency of a ship and its success in floating it.