Egypt. Details of the final hours of the procession of kings 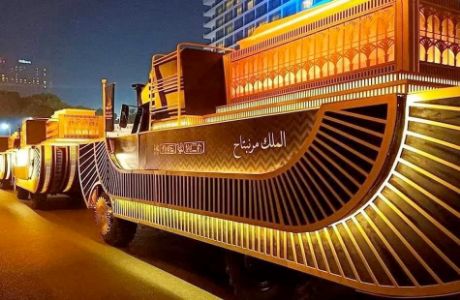 This evening, the world's eyes turn to Tahrir Square in the heart of the Egyptian capital, Cairo, where the procession of the Royal Mummies from the Egyptian Museum to the Museum of Civilization in Fassatat.

Mustafa Ismail, Director of the Mummies Unit, head of its maintenance plant at the National Museum of Civilization, said that "work has been under way continuously for 72 hours, and the team on the ground is preparing for the transport that the world is waiting for."

The mummies were now kept inside the "nitrogen capsules," and had been loaded onto vehicles in preparation for the procession this evening.

He revealed that several experiments had been carried out on the transfer of the convoy, in order to identify any disruption, albeit minor, and confirmed that precautions had been taken.

On the way mummies were kept during the transfer, Ismail pointed out that there were two ways: The first; Put them in the nitrogen capsule to prevent any vibration, the second; By keeping them in custom boxes inside the vehicles that will take part in the procession.

With regard to the reasons for the use of nitrogen capsules, he explained that it was an idea, applied through his associate team, to control the environment around the mummy's body, so as not to experience any damage or adverse effect, due to the change in temperatures that caused the mummy to stretch and contract, leading to fractures and breakdowns.

It was revealed that when the procession arrived at the Museum of Civilization, the mummies would be moved to their dedicated warehouse, which met the conditions for opening nitrogen capsules in an ideal environment.

Twenty-two royal pharaoh mummies and 17 coffins will begin their last journey, from Tahrir Square through the Wall of the Eye, until they settle in the Museum of Egyptian Civilization in Phasaat, kilometres from the Egyptian Museum.