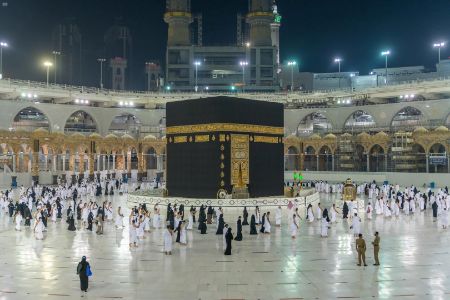 Saudi Arabia on Thursday issued an official statement on the video circulating on social media, which shows the presence of a member of the terrorist group ISIS inside the Holy Sanctuary.

"The Security Force of the Grand Mosque spotted a person carrying a white weapon and chanting statements in support of terrorist groups and organizations after prayers last Tuesday afternoon on the first floor of the Grand Mosque," the spokesman said, according to the Saudi Press Agency (SPA)

"The man was immediately arrested and arrested, and all the regular measures were taken against him," he said.

On Thursday, a video of a man on the campus screaming among worshippers alarmed social media users.

The man continued to chant the slogans of the terrorist group ISIS, until security officers arrested him in a way that did not harm the worshippers present at the scene, the Saudi newspaper Al-Safar reported.

The man shown in the video was found to be a "stray" group, according to preliminary data.

The man's video was widely circulated on the Social Media Platform twitter, with the hashtag "ISIS on the Sanctuary."