Yemen... Storming the Palace of the Presidential Hymns from the dome of protesters in Aden 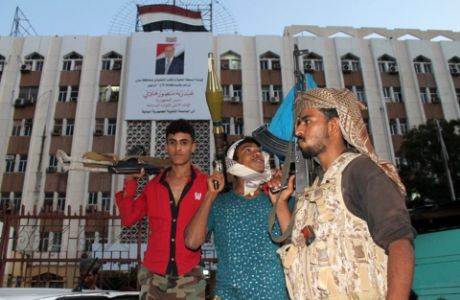 Angry protesters of the Palace of Al - Ashqiq raid the residence of Yemen's internationally recognized government, in the southern city of Aden.

Thousands of Aden residents demonstrated in protest at poor living conditions, poor services and late payment of salaries and pensions

The protesters went to the Palace of Moussiq, where they were shot in the air by the Palace Guard in an attempt to discourage them from breaking into it.

Protesters were able to enter the palace, chanting "Revolution, Revolution, South," and denouncing the Government.

It should be noted that yesterday, the Organizing Committee for the Popular Protests in Aden invited all segments of the people to rally on Tuesday morning to participate actively in the protest, which had evolved into the storming of the presidential palace

It is also noted that groups belonging to the Southern Transitional Council, a government partner, in accordance with the Riyadh Agreement, participated in the storming of minors.

As accounts posted on social media, what she said were scenes documenting Yemeni government ministers fleeing Aden via canoes.

Last December, Yemen's new government of 24 ministers, together with its President, Abd al-Malik, arrived in Aden, the temporary seat of the internationally recognized authority, days after being sworn in before President Abd Rabbu Mansour Hadi, in Saudi Arabia, where he has been living for years.

We have 276 guests and no members online