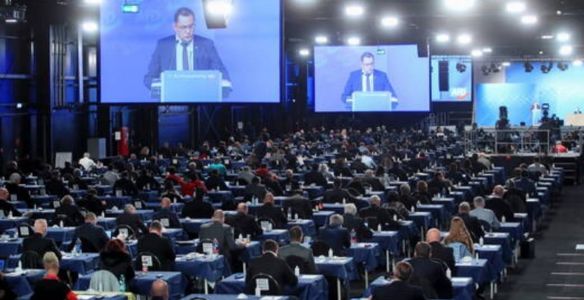 The head of the right-wing German nationalist party "Alternative for Germany", Tino Shropalla, condemned today, Saturday, the "state of emergency policy" led by the government of Chancellor Angela Merkel, in dealing with the Corona virus.

He said during a conference of his party: "Many lives are shattered, there is a current wave of bankruptcies, and many people are losing their jobs."

And "France Press" pointed out that "while Berlin is making arduous efforts to combat the second wave of the Corona epidemic, about 600 delegates of the right-wing nationalist party, which sympathizes with the movement to refuse to wear masks, started a conference that causes great controversy in the country."

The conference was postponed several times, and it is being held in the city of Kalkar in North Renania in Westphalia, where officials of the first German opposition party promised to ensure respect for the procedures of spacing and putting on protective masks, which is a prerequisite for holding the gathering, and the police are supposed to ensure that the procedures are implemented inside the building, which It is expected that it will comprise about 800 people in total, including party members and journalists.

Hundreds of German police officers will also be deployed today, as thousands of demonstrators will protest against the convening of the conference, at the invitation of the "We Stand Up Against Racism" group, which includes non-governmental organizations, trade unions and parties.