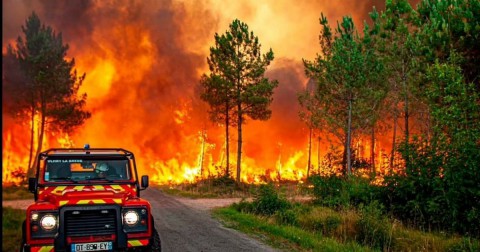 Violent fires broke out Sunday in southern France on 620 acres of pine trees, injuring four firefighters, and heavy winds and dry weather contributed to their spread, especially in the area of Gar, according to a fire service source. In Portugal, authorities mobilized more than 1,000 firefighters to extinguish fire on Sunday in the area of Mavra, north of the capital, Lisbon, due to sharp warming and drought.

William Borrelli, a spokesman for the fire service, told France Info radio that the blaze in Obeh, Gare region, was "very violent" due to severe winds and dry weather.

Some 300 firefighters are involved in extinguishing the fire, which has not yet been brought under control.

Part of central and northern Portugal was vigilant over the weekend in the face of a "sharp rise in temperatures" of over 40 degrees Celsius, according to the Portuguese Meteorological Institute.

Interior Minister José Luis Carneiro indicated on Sunday evening that a "red alert is scheduled for Tuesday" due to high fire risk "in the provinces of Villa Real, Bragansa, Guarda and Visio (North).

French Interior Minister Gerald Darmannan said in a post on Twitter that four firefighters were injured, including two receiving treatment for burn injuries.

The mayor of Obeh said in press statements that a number of families had been evacuated by the authorities.

In Portugal, the Civil Defense reported that a major fire broke out Sunday in the area of Mavra, north of Lisbon, after a sharp rise in temperatures over the weekend, especially in the central and northern parts of the country, calling for the mobilization of more than 1,000 firefighters.

In the evening, some 400 elements, with air support, worked to extinguish the fire, which broke out some 40 kilometres north of Lisbon.

At the time of the fire, residents tried to slow the fire's progress in nearby forests, according to images broadcast by local channels.

A 30-person elderly home was evacuated in a precautionary measure, according to civil defence official Paulo Santo.

In Aurim (Central), a river beach was evacuated in protective form, according to Lusa, a relief officer.

Portugal remains under the trauma of the 2017 fires, which have killed more than 100 people. Since early July, the country has experienced a series of fires fueled by rising temperatures.