Charred bodies and the children of victims. Bulgaria is experiencing an accident that has been described as "horrifying and tragic 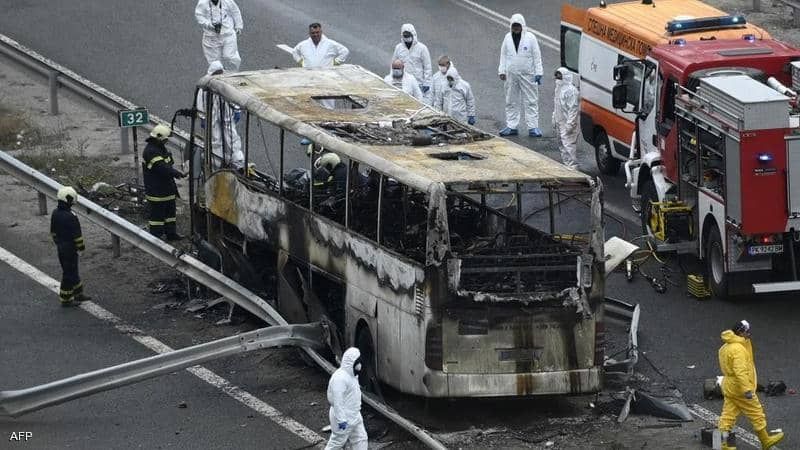 Early today, Bulgaria witnessed an incident that was described as "horrific and tragic" after a bus crashed on a highway and caught fire, leaving dozens of people dead and injured.

Authorities and local media said the incident killed at least 45 people, including 12 children.

On the scene, Bulgarian Interior Minister Boyko Rashkov told reporters: "I've never seen a more frightening scene in my life than this."

He added: "The accident is terrifying. The bus passengers checked out. It's impossible to determine their number. There were four buses traveling together. "

For his part, Stefan Yanev, the Bulgarian interim prime minister, who visited the scene, told reporters that the incident was a "great tragedy."

He added: "I take this opportunity to convey my sincere condolences to the relatives of the victims. Let us hope to learn lessons from this tragic event, and we can prevent such incidents in the future. "

Photographs taken shortly after the incident showed the bus burning, with plumes of heavy black smoke rising from the scene.

The British Daily Mail reported that a bus full of tourists was coming from North Macedonia, which, at around 2 a.m., crashed into a highway barrier and crashed and caught fire.

Daily Mail revealed that seven people were recovered from the wreckage, including a 16-year-old girl, and taken to a hospital in the capital Sofia.

We have 263 guests and no members online