Thousands of protesters in Amsterdam against Corona restrictions 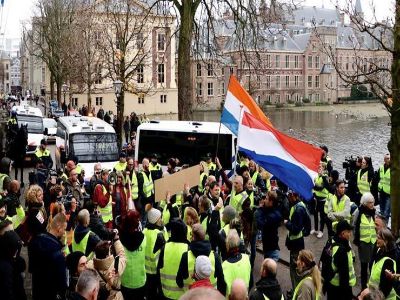 Today, the Dutch capital of Amsterdam, thousands demonstrated in protest against the restrictions imposed by the authorities in response to the Corona pandemic.

According to a source responsible for the Dutch authorities, some 10,000 people demonstrated against the Corona actions in central Amsterdam and then marched along a 7-kilometre road, sending a message to the protesters and urging them to stop coming to Dam Square in the centre of the city to participate in a demonstration against the bases of the Corona virus because it was so crowded.

It should be noted that the crowd of demonstrators included representatives from far - right parties, including the FvD party, and many protesters carried the flag of the Brynsflag, a copy of the Dutch flag used by neo - fascist groups.