Video taken by Anonymous... Take down a reporter. She stained herself with mud for excitement. 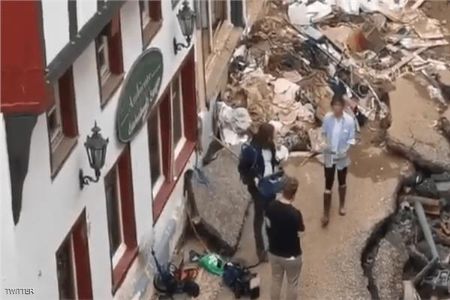 After a video was spotted smearing herself in mud just before it came out, to look like she too had been damaged, or at least helped those affected, a broadcaster was hit by a major scandal as it covered the devastation of the floods in Germany.

Susanna Ohlin (39) was about to air from one of the stricken areas, as part of her coverage of RTL, one of the largest private channels in Germany.

Before the live broadcast, the broadcaster quickly went down to the ground and grabbed the mud to stain her clothes and face, which was documented by an anonymous video.

When the video went viral, she apologized to her followers on Good Morning Germany. "As a journalist, this should never have happened. As someone who takes the suffering of all those affected seriously, that has happened to me. I'm sorry. "

In an Instagram post, she added: "Having been particularly helpful in the area during the previous days, I was ashamed to stand in front of the camera in clean clothes in front of other aid workers. And as a result, without thinking twice, I stained my clothes with mud. "

RTL announced Uhlin's suspension, saying by its spokesman: "The actions of our correspondent are clearly contrary to our own journalistic principles and standards. So we hung up on her after we found out what happened. "