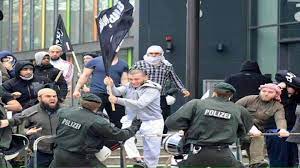 In conjunction with the intensification of warnings about German fighters returning to the country after returning from the battlefields in the Middle East, the head of the German Foreign Intelligence Agency recently warned of the growing power of ISIS.

According to experts, the return of foreign fighters to their countries after years of fighting in the ranks of ISIS in Syria and Iraq is a time bomb that threatens Europe to explode at any time, while warnings to "solo wolves" groups suggest that they pose a greater risk because they are cells that already exist within European society.

The experts link the actions initiated by several European States to surround the activity of extremist organizations, at the heart of which is the Brotherhood, with the warnings observed by the European intelligence services.

They said that terrorist organizations operated in a connected circle on a single agenda. The brothers were the first link to recruit combatants from within European cities and facilitate their travel abroad.

The European Centre for Counter-Terrorism and Intelligence Studies estimates that 1050 Germans travelled to Syria and Iraq to join ISIS, more than 330 of whom returned in waves between 2014 and 2015, hundreds remain in Iraq and Syria, and about one third of foreign German fighters remain active in the area or are held by security forces.

A recent study by the Centre shows that Kurdish forces are holding up to 200 Germans in prisons and camps in north-eastern Syria, according to the report of the International Counter-Terrorism Centre.

German internal intelligence warned of a wave of terrorism that could re-invade the country, but the danger of so-called "solo wolves," for example, a term called online radicals, is very difficult for intelligence agencies to monitor or prevent.