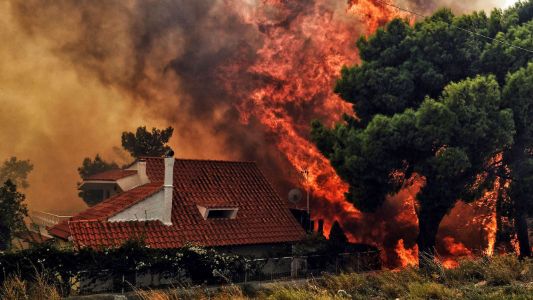 In the fire, triggered by strong winds on Saturday afternoon and engulfing the foothills of the Troodos mountain range (south) in Cypriot forests, the Cyprus Forest

Management reported: "The fire that broke out Saturday was completely brought under control on Monday 5 July at 08:00 (05:00 GMT)."

Firefighters were still heavily deployed around the village of Arakabas, to deal with any possible additional fires.

The fire, considered the worst since the founding of the Republic of Cyprus in 1960, destroyed some 50 houses and power lines and led to the evacuation of 10 villages.

An area of about 55 square kilometres, usually covered by plants and crops, was destroyed by fire.

Old olive trees appeared to be turning into charred trunks as the ash filled the place. Burning houses were also seen in the village of Aura.

Authorities arrested a 67-year-old farmer on suspicion of causing the fire, which he denies.

The police said eyewitnesses reported that they had seen Arakabas leave in his car to coincide with the fire there. He may face charges of four deaths.

More than a 600 emergency and army elements were involved in the suppression of the fire, as well as some 10 aircraft, 70 fire vehicles and an unmanned reconnaissance aircraft, according to the Forestry Department.

Israeli and Greek aircraft participated in the operation using British bases in Cyprus.

We have 138 guests and no members online