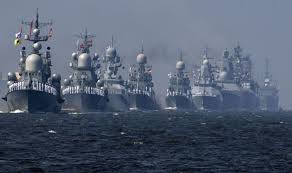 Western States and Ukraine expressed concern following the announcement by the Russian Ministry of Defence that they had moved more than a dozen naval vessels, including landing ships, from the Caspian Sea to the Black Sea, to participate in exercises near Ukraine.

Moscow said that its forces would remain in the region as long as they saw a need, and that they posed no threat.

In Kiev, Ukrainian President Volodymyr Zelensky headed to the front line in the conflict with Russian loyalists in the east of the country, Thursday, against the backdrop of escalating clashes and renewed tensions with Russia.

The Presidency said in a statement that "the Head of State will inspect sites where the ceasefire regime has been systematically violated recently, and where Ukrainian soldiers have been killed or injured."

Kiev had revealed its fear of Russian military reinforcements near the border, due to increased violence along the line between Ukrainian and Russian-backed forces in the Ukrainian Donbass region.

In a telephone call with German Chancellor Anguilla Merkel, Russian President Vladimir Putin accused Ukraine and the Chancellor of a provocative move in eastern Ukraine, which he described as fuelling tension in the region.

In a statement, Merkel's office said that the German Chancellor had urged the Russian President to reduce the build-up of Russian forces near Ukraine.

"One of the topics of their conversation was, among other things, the increasing Russian military presence near eastern Ukraine," the statement explained, adding that "the Chancellor called for a reduction in these military reinforcements to calm the tension."

Ukraine accuses the separatists, whom it considers Moscow supports despite the Kremlin's denial, of escalating armed clashes since the beginning of the year, and Russia of mobilizing its forces along the Ukrainian and Crimean borders annexed by Moscow.

For their part, the Russians and the separatists hold Kiev responsible for the increase in armed incidents.

This renewed tension follows an unprecedented and widely respected ceasefire throughout the second half of 2020 and raises fears that the conflict has escalated, killing some 13,000 people since 2014.

We have 210 guests and no members online