The Suez Canal first and now the Aaron River... A driveway in the British River Aaron 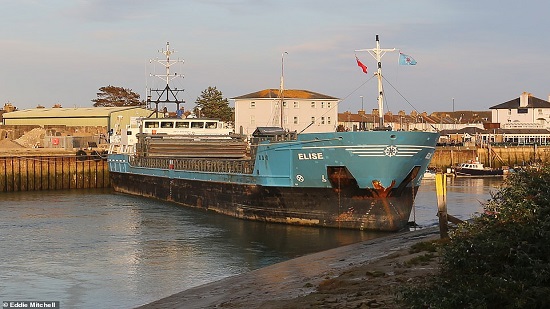 A giant ship swept across the River Aaron in southern Britain, prompting many to compare it to what happened with the Iver Geffen, which closed navigation on the Suez Canal for about a week.

The British Daily Mail reported on its website that Tuesday, in West Sussex, southern Britain.

The story began when the 80-metre-long Elise strayed from its anchor at Little Hampton Harbour on one of the riverbeds, partially closing the port entrance.

The ship carried the flag of the State of Antigua and Barbuda and, on its most recent voyage, proceeded from the port of Antwerp in Belgium to unload at the port of Little Hampton.

As it entered the British port, the tide caused the ship to break out of its anchors in the port, and it drifted 30 metres downstream, partially closing it.

While the drift of the Iver Given closed the route to navigation in the Suez Canal, British authorities said the ships could pass hard on the muddy River Aaron.

No injuries or contamination were reported.

Subsequently, the ship was back on track, without having to intervene according to the port authorities, but images showed small ships towing the ship.

The leaders of social media in Britain were quick to compare the two incidents, some of whom said: Suez First and now Aaron River.

Another added: "I hope that global trade will recover from this impasse."