"Brutal Description" Assault Inside a Men's Pontoon on Women in China 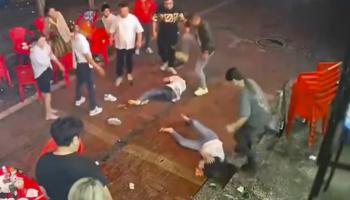 In China, a group of men assaulted women who were inside a freshener, especially since video footage documented the assault described as "brutal", the Chinese authorities arrested 8 people in the northeastern Chinese city of Tangshan, after a group of 3 women dining in a restaurant were assaulted

The footage, which went viral on Weibo, a Chinese Twitter-like platform, shows a man approaching a restaurant table and putting his hand on a woman's body in an act of harassment, but the woman pushes him away before he assaults her, but resists him by throwing a water bottle at his head.

Her two friends, who were with her on the table, did not stand idly by. One of them also hit the aggressor with bottles, then a number of his friends who were with him intervened and beat the second lady, while the first lady was squashed to the ground outside the restaurant, where she was brutally beaten by kicking and smashing pots on her body.

One of the lady's friends was thrown out of the restaurant very violently, after trying to stop the assault on the woman.

Despite  some shy attempts to stop the assault, the first aggressor in the restaurant continued to beat the woman who tried to molest her inside, kicking her face with his foot.

The physical abuse of the woman lasted for about 3 minutes, and the assailants later disappeared on a side road before being pursued by the victims.

The local police said that two women had sustained non-life-threatening injuries and were being treated at the hospital.

In a leaflet on Weibo, the local public security office said that the police had arrested the nine suspects in the case by this afternoon and an investigation was ongoing.

The discussion of the attack on Chinese social media and the top six of the most controversial topics dominated Weibo.

According to a commentary published by the All-China Women's Federation website, which cares about Chinese women's news, "such brutal cases of grave violations of women's rights and interests must never be tolerated".

In February, the appearance of a woman from Feng Province in eastern China's Jiangsu Province tied by the neck in a video that went viral on social media sparked huge public outrage in China.

We have 345 guests and no members online