Demonstrators in Myanmar march three months after the coup. And the United Nations warns. 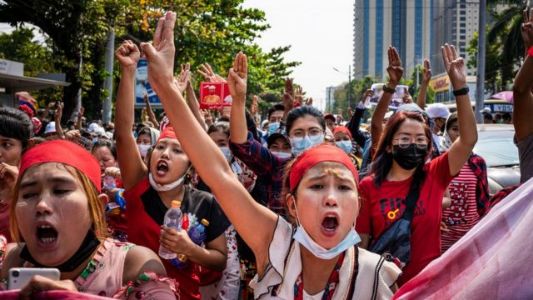 Protesters marched against Myanmar's military rule, three months after a coup that ended the democratic transition, with several small explosions exacerbating a sense of crisis that the UN envoy warned could lead to a halt to state administration.

The army tried to end the opposition and impose its authority on a people that largely opposed the return of generals to government after 10 years of democratic reforms involving a government led by Aung San Suu Kyi, the champion of democracy.

Despite a relentless crackdown in which at least 759 demonstrators were killed, according to AAPP, crowds come out day by day to reject the military junta.

The protesters echoed chants: "our cause, democracy, our cause, a federation. "Free Leaders," at a rally in the main city of Yangon.

Suu Kyi, 75, has been arrested since the coup with several other members of her party. The Association states that more than 3,400 people have been arrested for opposing the military.

Media reported that people also gathered in Mandalay II and the southern town of Dawi. There were no immediate reports of violence.

The media reported several small explosions in various places, including Yangon, with no immediate reports of casualties and no one claiming responsibility for the incident.

A spokesman for the junta did not respond to calls for comment. The army accused pro-democracy activists of planting bombs.

For his part, the United Nations Special Envoy for Myanmar stated to the Security Council: "In the absence of a collective international response to the coup, violence is worsening and the State administration is threatening to stop." According to diplomats, they attended the special meeting.

The United Nations Security Council also reiterated its "deep concern" about the situation and its support for the democratic transition process in Myanmar. The Council has issued several statements since the coup, but diplomats say that Russia and China are likely to prevent any stronger action by the Council against Myanmar.