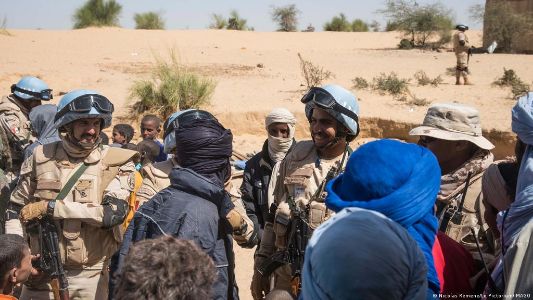 In line with the ongoing security crisis since 2012 and the emergence of separatist and jihadist insurgencies in the north of the country, Mali, the poor country in the Sahel, witnessed two military coups between August 2020 and May 2021.

Near the city of Gao there was a renewed spiral of violence in Mali, where militants killed at least 20 civilians in several villages in the Anchaudge region ", which is tens of kilometres north of Gao, while a soldier in the peacekeeping force spent Sunday in Kidal, in the north of this coastal country, where the security situation is worsening.

United Nations Secretary-General Antonio Guterres "strongly" condemned the attack. It was stated in a statement that "attacks against United Nations soldiers can amount to war crimes in terms of international law and should be prosecuted".

No other source has confirmed that the jihadists are behind the attacks, but in this sprawling coastal region, the frequency of attacks by the Islamic State jihadists in the Sahara is increasing as their area of operation expands.

The scant information from this remote area speaks of the deaths of hundreds of civilians and the displacement of thousands in recent months in Minaka, near the border with Niger, and Gao West.

On Wednesday, Mouvement de libération de l'Azawad (MLM), one of the groups fighting jihadists, confirmed that 22 people had been killed by "gunmen" in the town of Ezingaz, Minaka. No other source has confirmed or denied this information.

Since the conflict began in 2012, the region has witnessed violence, when armed groups began an insurgency against Bamako. In 2015, they signed a peace agreement with Mali, but its implementation is stalling.

Smugglers and other gangs are also present in this Saharan region outside the State's control.

Two Malian soldiers and elements of the United Nations Peacekeeping Force in Mali (MINUSMA, 13 thousand troops), as well as French soldiers under Operation Barkhane, are deployed in Gao.

French soldiers began a gradual withdrawal from Mali at the beginning of the year. The French Chief of Staff said that they would finally leave the Gao base "by the end of the summer", which was the last foothold for French forces in Mali.

We have 312 guests and no members online