South Africa... Widespread violence and chaos, and the Government did not expect the scale of looting and vandalism that took place. 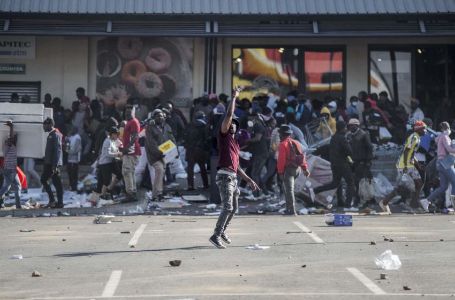 Following a court sentence of 15 months' imprisonment for refusing to execute a Constitutional Court order last February and providing evidence for a corruption investigation during his nine-year sentence until 2018,

On Sunday evening, Johannesburg became a battlefield, following widespread violence and chaos on its streets against the backdrop of continued protests following the imprisonment of former President of the country, Jacob Zuma.

The Minister of Defence of South Africa, Noseviwe Mapisa Nqakula, said that military forces had been deployed in important parts of the country, such as airports, amid ongoing violence.

At a press conference today, the Minister added that the Government had not anticipated the scale of looting and vandalism that had occurred in the commercial centres, following the imprisonment of former President Jacob Zuma, stressing that it continued to estimate the number of soldiers wanted.

A number of shops in Johannesburg were looted, several roads were blocked, protesters carrying sticks took off on the streets of the city, and the National Intelligence Service announced the arrest of 62 people.

For his part, the country's current president, Cyril Ramabusa, commented that there was no justification for the violence, noting that the unrest was "harming our efforts to rebuild the economy" amid the Covid-1999 pandemic.

Jacob Zuma appealed his sentence to the Constitutional Court on grounds including the deterioration of his health and the risk of "Covid-19" infection, and parliamentary officials said that there was "sympathy for the personal difficulties faced by former President Jacob Zuma. But the rule of law and the rule of the Constitution must prevail. "