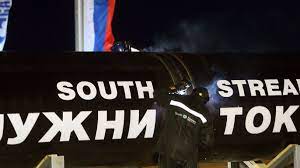 After the explosions that hit the Nord Stream One and Nord Stream two pipelines transporting Russian gas to Europe last September , the Russian Federal Security Service announced that it had foiled a terrorist attack on the "Southern Stream" gas pipeline, which supplies Turkey and Europe with energy.

"As a result of a set of operational measures, an attempt by Ukrainian intelligence to commit a sabotage and terrorist act on the South Stream gas pipeline, through which energy is supplied to Turkey and Europe, was prevented,"the agency's statement said.

The FSB also reported that Russian citizens "involved in the preparation and execution of the terrorist attack were detained. 4 four magnetic mines, 4 kilograms of plasticine, 593 thousand rubles and means of communication containing correspondence with the special authorities of Ukraine, instructions for assembling and installing an explosive device, as well as the transfer of funds and the coordinates of the place where the explosion is planned to be carried out were confiscated in the Volgograd region,"he said.

The South Stream pipeline project was aimed at transporting Russian gas through the Black Sea to Bulgaria, but it was later canceled and replaced by the "Turk Stream"project.

Earlier this month, the Russian military accused London of involvement in the explosions that caused leaks in September from the Nord Stream 1 and 2 gas pipelines in the Baltic Sea, which were built to transport Russian gas to Europe.

"Representatives of a British naval unit took part in the planning, supply and execution of the terrorist act in the Baltic Sea on September 26 to sabotage the work of the Nord Stream 1 and 2 gas pipelines,"the Russian Defense Ministry wrote on Telegram at the time.

Russia, which has extended the "Nord Stream" pipelines with foreign partners, says that the damage was caused by sabotage.