The child is Francisco Vera.. "Cup 27" is an opportunity to defend life and save the future of millions of children around the world 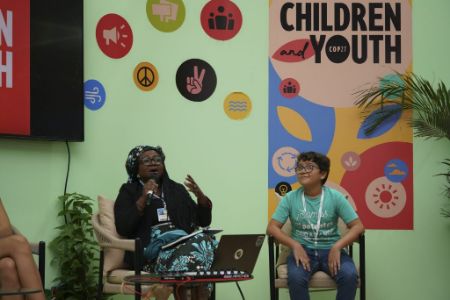 At the age of nine, Colombian child Francisco Vera founded the "life guards" movement, a group of 500 children and young people, to promote environmental awareness in Colombia.

Now he is only 13 years old, and he is participating in the climate summit currently being held in the Egyptian city of Sharm el-Sheikh "Cup 27", and despite his young age he is a high-caliber environmental activist, and an adviser to the UN children's committee.

Francisco Vera published a children's book on awareness of climate change and its negative effects on the whole world, entitled "What is climate change" in Spanish, which was translated into Arabic by the Egyptian Dar Al-Shorouk.

Vera notes that he sees the "cup 27", "an ideal opportunity to continue to defend life in all its manifestations, and to save the future of millions of children around the world, suffering from extreme climatic conditions".

"The human race is capable of creativity, which is what it needs to do to reduce greenhouse gas emissions, by discussing more creative ideas,"he adds.

"I do not doubt the conscience of the people of the world, but I need to be more confident in governments and industrialized countries, which bear greater responsibility for emissions,"the Colombian child continues.

The environmental activist criticized "countries that classify themselves as developed", explaining that"for hundreds of years they have been exploiting the resources of poor countries, which has resulted in an accelerated pace of climate change".

Vera believes that" the one who bears the greatest responsibility is not the countries that suffer, but the countries that caused this suffering, especially since the affected countries do not have funding for adaptation to climate change, "which he considered"the key to solving these crises".

About his book "What is climate change", he says: "the book is aimed at all people around the world, regardless of their age, because the goal is to educate those who want to know how and why climate change is generated. They can understand it through the series of topics I covered in the book".

"The book also has some illustrations that enrich the text, which I hope will inspire many people to take action for life and the planet,"he adds.

About his native Colombia, the child points out that it is "the second most biodiverse country in the world, where thousands of species of living beings live".

"The Colombian government, through President Gustavo Pietro, has proposed a global pact for the Amazon, which seems very important to me because the planet has no borders and what happens in a place like the Amazon can affect another place like Egypt or Africa,"he continues.

Colombian President Petro announced last August that he would ask rich countries and multinational companies to pay farmers to protect the Amazon forests and return the areas removed from the trees, revealing his intention to present this initiative during the (cup 27)".

"Together with thousands of children from Colombia, Spain and Latin America, he signed the declaration of environmental Hope, which aims to ask governments and civil society to educate citizens about climate change around the world,"explains Vera.

The environmental activist and children's adviser to the UN children's committee demands to"guarantee the right to clean rivers, air without pollution, seas without plastic".