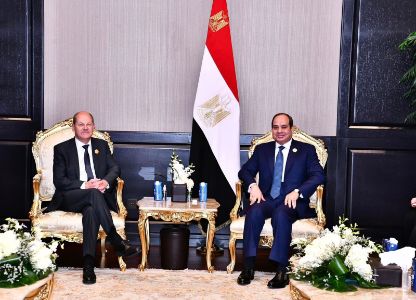 The official spokesman for the Presidency of the Republic stated that the President welcomed the visit of the German Chancellor to Egypt, praising the development of the course

of bilateral relations between Egypt and Germany in all political, economic, social and military fields, which was reflected in the rate and intensity of exchange of visits between senior officials of the two countries, the latest of which was his visit to Berlin Last July, emphasizing Egypt's aspiration to maximize joint cooperation during the coming period and enhance coordination and political consultation.

For his part, the German chancellor expressed his sincere appreciation for the warm reception and hospitality, expressing his great admiration for the distinguished Egyptian organization of the World Climate Summit, and appreciating the close ties between Egypt and Germany, and the remarkable momentum witnessed by the relations between the two countries in recent years, especially at the level of economic and trade relations. Germany considers it a strong partner for cooperation and for facing common challenges.

The Spokesman explained that the President expressed his aspiration to enhance Germany’s contribution to the priorities of Egyptian development plans in various fields, by increasing German investments in Egypt, especially in the sectors of industrialization and energy such as green hydrogen, tourism, technical education and vocational training, in light of promising opportunities in national projects. The largest across the territory of the Republic. On his part; Chancellor "Schulz" affirmed Germany's keenness to support the ambitious measures undertaken by Egypt in pursuit of comprehensive development, especially through increasing investments, transferring expertise and technology, and settling German industry.

The Spokesman added that the meeting also dealt with discussions on the latest developments of a number of regional and international issues of common interest, in addition to discussing the joint efforts of the two countries to support and enhance climate action at the international level.

We have 196 guests and no members online